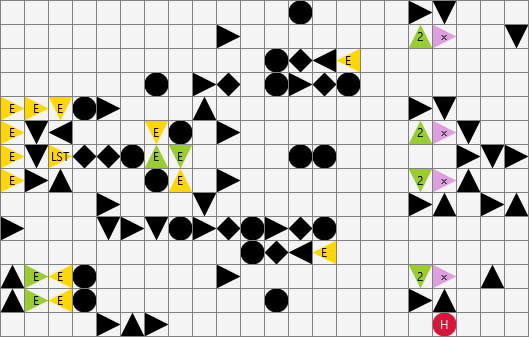 In October 2018, I participated in Durhack, a hackathon run by the university's computing society. The idea was simple: An esoteric 2-dimensional visual programming language, where data flies around the screen in real-time.

In a group of three, we wrote v0.1 of SharpShot in 24 hours. The first commit was 2 hours after the hackathon started, and by hour 5 it was fully usable - which I know thanks to a commit optimistically titled "Hackathon done!" at 4:45pm.

The remaining 17 hours contained more playing with the program than developing it. It is incredibly addictive - when taking the Github screenshot I accidentally spent 5 hours playing around with it instead. SharpShot won the "Github prize for best developer tool", and placed second overall in the hackathon.

Sharpshot is a game where players attempt to solve a series of challenges by combining simple components. They place nodes on a rectangular grid known as a board. Its size is configurable by the user. Each node performs a pre-determined function on bullets, which carry data around the board. When a bullet leaves the board, it is written to the output. When two bullets collide, they annhilate each other, which is the main way of performing boolean logic!

A solution is scored on three metrics:

Faster, cheaper, and smaller solutions are better. The solution will be given a percentile grading for each of these metrics, relative to all other players. It is almost impossible to optimise all three metrics at once, so most solutions will optimise for just one. To pass the level, a solution does not need to be optimal - it just has to pass the test suite.

The current version of the game does not have set levels and does not provide a score. It is still a sandbox while development continues. The core gameplay is quite stable and fun to play around with, which you can do by downloading it via GitHub.

The game is currently in version 0.4.1, and there's a lot left to do before v1.0. In it's current state, the roadmap is as follows:

I'll let you know how that goes!

If you have any suggestions or comments, definitely get in touch. PRs are always welcome, it's open-source for a reason!